The Zillertal - your vacation paradise

Welcome to the Zillertal - our region is not known as the "most active valley in the world" for nothing. Countless activities in nature such as hiking on over 1000 km of hiking trails such as the famous Berliner Höhenweg, great routes by bike or bicycle, for mountaineering numerous high - alpine tours in the spectacular Zillertal Alps on one of the many 3000m peaks such as the highest mountain in the Zillertal, the "Hochfeiler", climbing in the "Zillertal Alps Nature Park" or the popular via ferratas and high ropes courses make the Zillertal summer an experience.

The Aktivcard Zillertal offers a great service for adults and children: the 6-day ticket includes all bus lines, summer mountain railways and the Zillertal railway as well as numerous other sights and excursion tips - ideal for families and free for children! And then of course the Zillertal winter - this mainly revolves around skies and snowboards.

There are a total of 7 ski areas of every size - a brief overview: the Spieljochbahn in Fügen, the large Hochzillertal - Hochfügen ski area in Kaltenbach and Hochfügen, the Zillertal Arena in Zell and Gerlos, the Gerlosstein am Hainzenberg ski area, the Mayrhofner - Hippach mountain railways on the Penken mountain and "Ahorn", the Finkenberg and Lanersbach ski areas as well as the majestic Hintertux Glacier at the end of the Tuxertal - the winter season never ends in Austria's only year-round ski area, all year round skiing is only possible here! There are a total of 179 state-of-the-art lifts and 508 kilometers of slopes. All ski areas are combined in the so- called "Superskipass". Other winter activiies include tobogganig or cross-country skiing, both sports are very well known and popular in the Tux mountains, with the longest cross-country ski trail in the valley, this sport is not neglected here - and with 3 toboggan runs you experience pure tobogganing fun.

Located on the "Ziller" river, this gives the valley its name. Geographically, the Zillertal with its 5 large side valleys (Tuxertal, Zemmgrund / Ginzlng, Zillergrund, Gerlostal and Hochfügen /Hochzillertal) is centrally located in the state of Tyrol, which in turn is reffered to as the "Heart of the Alps". It stretches from the Hohe Tauern National Park to the Tux Alps. The northernmost place is Strass and in the very south is Hintertux - there are almost 50 km in between. Arrival and departure is uncomplicated via the motorway to Salzburg or Innsbruck.

In Austria, our holiday region became known through alpine tourism at the turn of the last century in the mountains of the Zemmgrund, more precisely in Ginzling. Over the years, an international tourist infrastructure has developed: starting with events with a long tradition such as the 'Gauderfest' in Zell, the 'Snowbombing' in Mayrhofen, the Krapfenfest in Schwendau, cultural highlights such as the Steudltenn in Uderns or the "dumb cry" in mute. Numerous traditional music groups such as the Haderlumpen, Ursprung Buam, Zillertaler Mander, Juzi or the Schürzenjäger all have their own festival for their fans. The Bike Challenge is now one of the most famous mountain bike races in Austria and takes place every July. The most famous sights and excursion tips include the countless alpine pastures and huts, the adventure dairy, the natural ice palace, the adventure spa or the Höhenstrasse.

First holiday region in the Zillertal 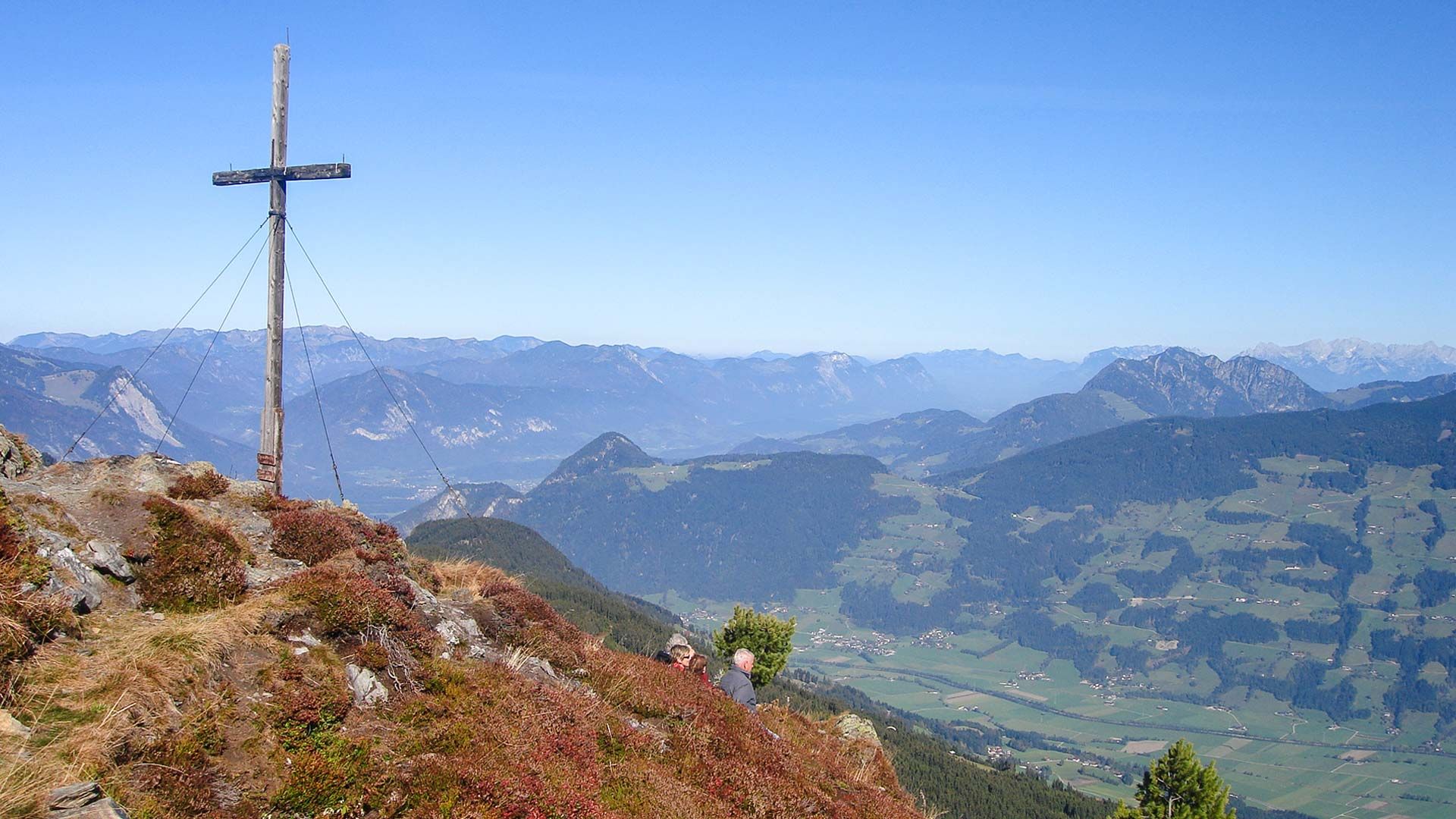 The “First Holiday Region in the Zillertal” begins where the Ziller branches off into the Inn and comprises 12 idyllic locations: Strass, Bruck, Schlitters, Fügen, Hart, Uderns, Stumm, Ried, Kaltenbach and the Stummerberg. In winter, the area shines with the popular Spieljochbahn and Hochfügen-Hochzillertal ski areas - afterwards you can go swimming or have a sauna in the thermal baths. Summer offers plenty of sun through the wide basin and the temperature can exceed 30 degrees. The gentle mountains on both sides of the valley provide cooling. For golf enthusiasts there is the 18-hole golf course in Uderns. Also interesting: the amusement park at the campsite in Aschau. 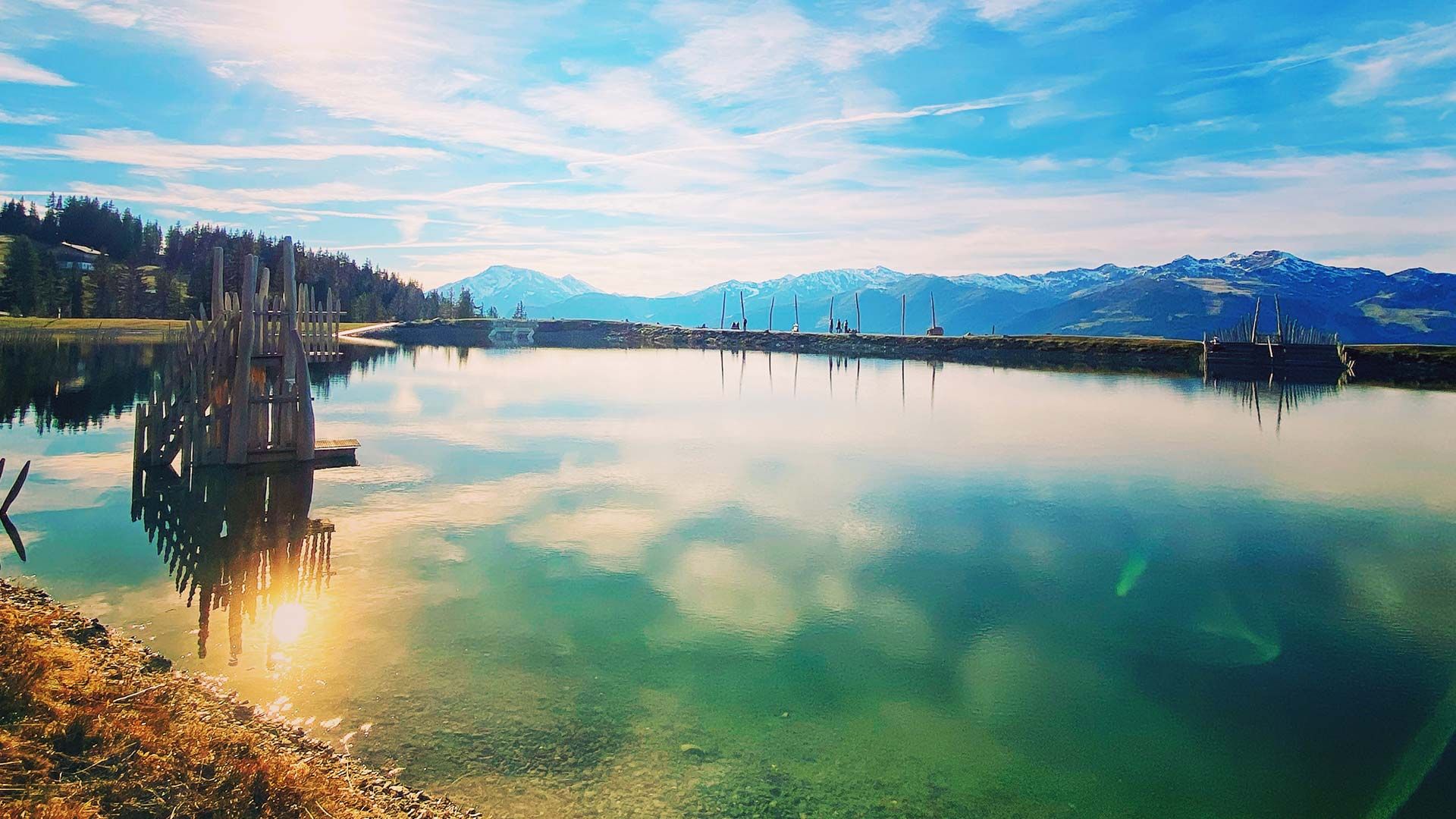 The two main places of the Zillertal Arena are called Zell and Gerlos and offer everything a holidaymaker desires. The most modern lift systems in the largest ski area in the valley, which also offers many highlights and attractions such as the Arena Coaster, Moonlight Dining, Snowtubing, SkiMovie and Speedcheck, Good Morning Skiing and the impressive snow parks, extend to Königsleiten and let you experience skiing in a new way. Summer action is offered especially with children: the Arena Skyliner and SummitLiner, the single trails, the yodelling hiking trail and brand new: the spectacular spruce castle offers lots of fun for young and old. 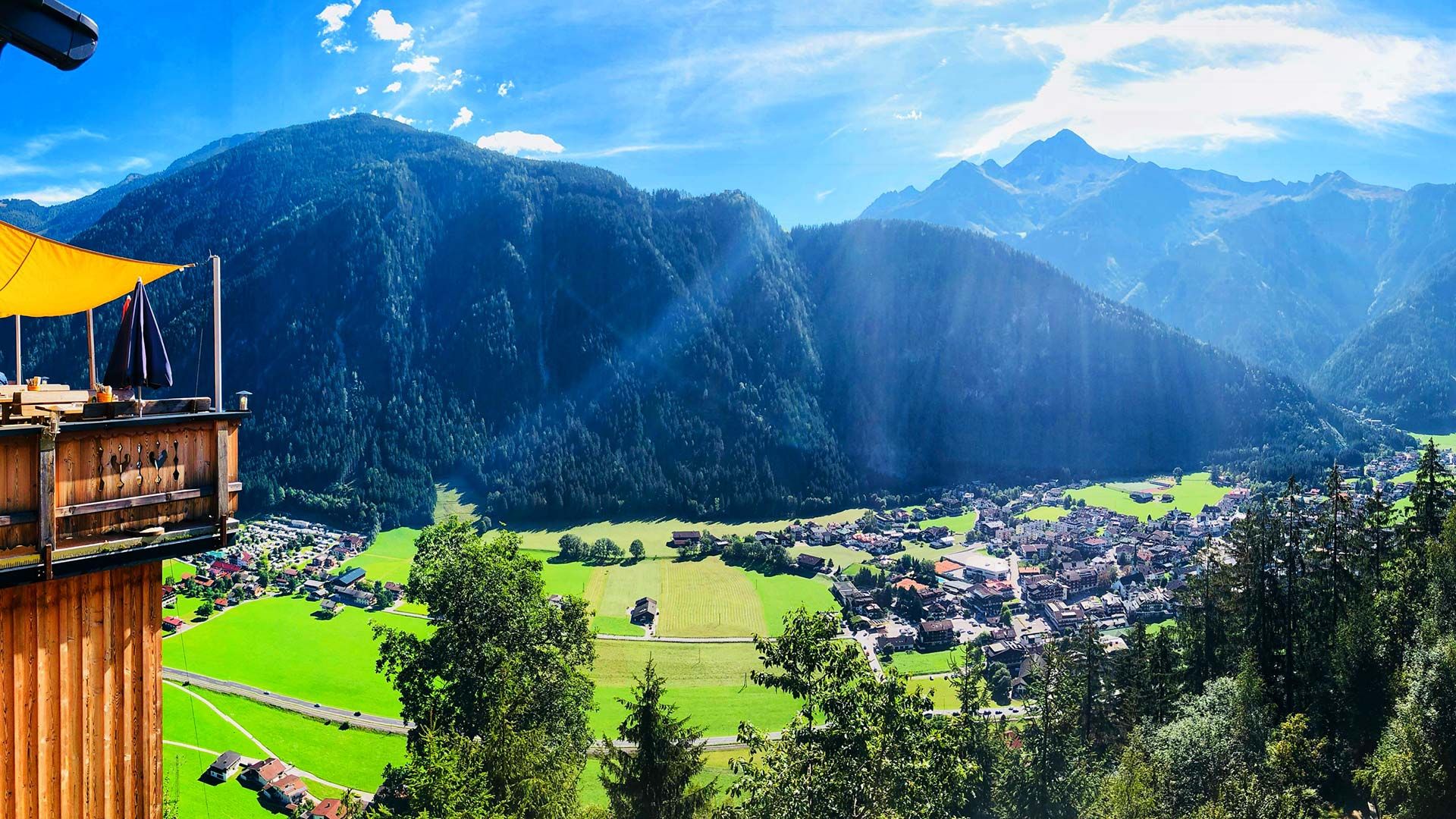 The Zillertal Alps Nature Park has existed around the towns of Mayrhofen - Hippach since 2001 and is the ultimate experience of nature: with a size of 379 km² there is an unbelievable variety of nature, flowers and animals. 85 glaciers belong to the nature park, the water of which is collected in the Schlegeis, Stillupp and Zillergrund (Brandberg) reservoirs. Thus the must-see in Mayrhofen and the center for your summer vacation in the back valley. Also popular: running ("Run & Walk Park"), biking (800 kilometers of cycle paths + Hürzeler Bike Station) and the high-altitude hiking trails from hut to hut, such as the "Berliner Höhenweg". With the well-known “Ahorn” and “Penken” ski mountains, the Mayrhofner Bergbahnen are one of the most famous ski areas in the world and, among other things, are known for being home to snowboarders and freeriders. The Harakiri slope, the largest gondola in Austria and the many cozy ski huts and much more can be discovered. 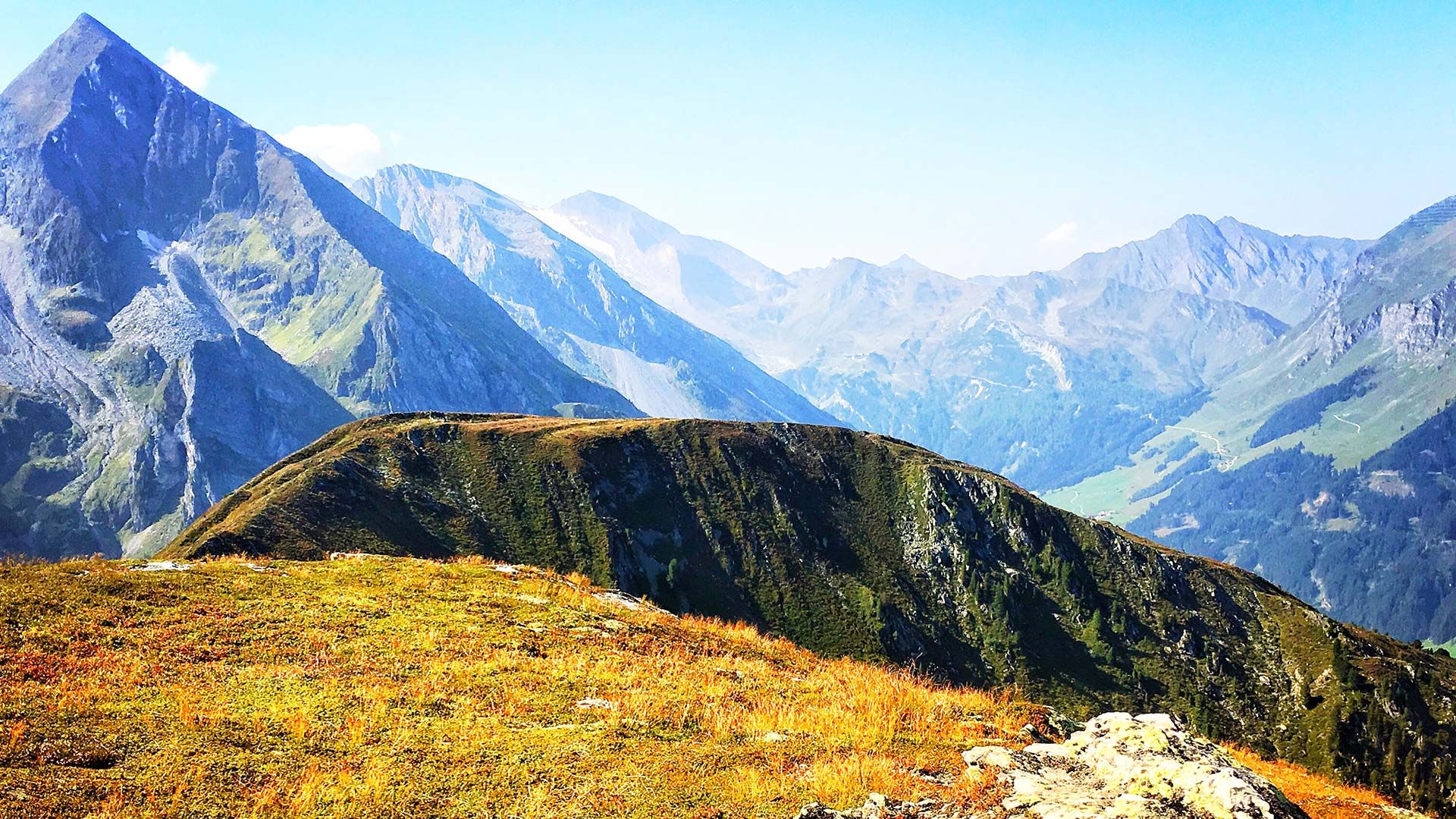 At the end of the Zillertal lies the Tux - Finkenberg region with the eponymous communities. The literal highlight is the glacier in Hintertux. The spectacular gondolas take you up to 3,250 meters above sea level - the highest point that can be reached by lifts. You can ski all year round on the Hintertux Glacier, perfect conditions can be expected as early as October. The unique high valley with its special location and climate is ideal for hiking - the many farms and alpine pastures cultivate a large area of ​​cultural landscape and provide the special place, hence the name "the green glacier valley".

Are you ready for your vacation in the Zillertal?

Search, book and find the most beautiful room, the most luxurious suites, the most comfortable holiday apartment online here on our portal - simply the best accommodation for you. We offer you every category: from the 5 star hotel, 4 star superior hotel, 4 star hotel, bed and breakfast hotel, inn as well as smaller accommodations such as guesthouses, holiday flats and apartments, mountain huts, holiday homes, camping to cozy guesthouses or farms Find out which holiday offers the Zillertal has to offer for your winter or summer vacation! The most important information can be found here on the zillertal-online website - but personal contact is also important to us: send your request to our editorial team by email - we will help you with your search and find the best offers in our region, information about hiking and Well-known excursion destinations, the current weather, tariffs and opening times, route planner, the event in your area, guided hikes, Zillertal Activcard, etc. We would be happy to send you brochures or a map for hiking. If you need a recommendation for your trip: we have all the tips for excursions ready - for the most important time of the year: your vacation! Stay in touch with us via our newsletter, the snow report subscription, the blog or the social media channels - with us you will be well informed. You can also use our webcams and panorama cameras to see what is happening with us in terms of weather in the ski areas. For many years we have been the reliable partner for your short weekend trip, your summer vacation, winter vacation, skiing vacation or family vacation with children and everything, or just for a short excursion to one of the many Tyrolean side valleys.

E-Mail: This email address is being protected from spambots. You need JavaScript enabled to view it.